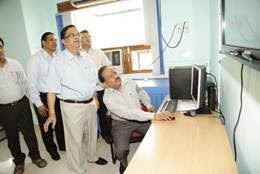 The Union Cabinet chaired by the Prime Minister Shri Narendra Modi today gave its approval for signing the Paris Agreement adopted at the 21st Conference of Parties held in Paris in December 2015.

Minister of State (Independent Charge) of Environment, Forest and Climate Change, Shri Prakash Javadekar, will sign the agreement on behalf of India on 22 April 2016 at the high level signature ceremony convened by the Secretary-General of the United Nations, Mr. Ban Ki-moon.

The Mimetic Peculiarities of the Plant World

Both, plants and animals, have in one way or the other embarked on mimetic phenomenon as a means to thrive well in this dynamic and ever challenging environmental surroundings.

The plant kingdom is overwhelmed with number of genus and species. The plants are well-known for their adaptive strategies to subsist in the natural territory.One such stratagem is the mimicking act of the plants to shield themselves from herbivory ,to enhance their survival rate and in some cases for pollen dissemination. For instance many species of orchids are known to imitate the bees or appear as tongue, some plants appear as stone, still others appear as bird droppings or diseased.


An early hint of this deceptive act of the plants was given by German naturalist Christian K. Sprengel in 1793. Although a less observed phenomenon, mimicry in plants is a consequence of evolution through natural selection and random mutations that are beneficial and are passed onto generations after generations, thus, conferring them with survival advantage.

Some of the well-known examples of deception and trickery in plants are stated below.

Orchids present the best examples of plant mimicry. One such orchid is Ophrys apifera, which resembles like a bee, hence commonly known as Bee Orchid. Native to Europe, the whole flower mimics as an insect feeding on flower. This traitorous species tricks the male bees by appearing to them as their female counterparts, as a result, the male bees try to copulate with the latter, furthering the dissemination of the orchid pollen.

If you happen to walk down the wide areas of South Africa and Namibia you chance to see interesting pebbles which are, in fact, small succulent plants Lithops , member of the plant family Aizoaceae. They protect themselves from being eaten up by looking similar to a stone. They are well adapted to sandy soil , water scarcity and soaring mercury levels.

These herbaceous flowering plants of the family Lamiaceae are natives of Europe, Asia and North Africa.They are known to exhibit Batesian mimicry to the stinging nettles, thus, protect themselves from predators by growing in proximity to their dopplegangers. Unlike stinging nettles the dead nettles donot bear any stinging hair and are, therefore, harmless.

Orchids are one of the enthralling plant species we have come across. These are, in fact, most deceptive species in the floral kingdom. Another one in the Que is the Cryptostylis , commonly known as the tongue orchid. These mimic the female counterparts of the Ichneumon wasp (commonly known as orchid dupe wasp- Lissopimpla excelsa). The male wasps are deceived by these beautiful tongue orchids, who sexually go down and try to copulate with them.

The Passiflora is comprised of nearly 400 species of tendril-bearing herbaceous vine, commonly known as passion flowers. They hold a special interest among the botanists in context to their relationship with Heliconiine butterflies. These butterflies have co-evolved with these flowers. The butterflies have known to lay their eggs on the Passiflora leaves. Eggs when hatch into healthy larvae feed glutanously on the leaves, thereby, damaging them. The vine in response bear bright yellow spots that mimic the distinctive brightly coloured eggs of the butterflies. As a result, the butterflies do not lay eggs on such leaves fearing competition for their off-springs.

Commonly known as the Sundews, these are the largest genera of Carnivorous plants. The leaf surface mimics tiny water droplets that appear as sundew but are, in fact, mucilaginous glands. As a result, insects often fall prey to this deception to fulfill their poor mineral requirements.

Ophrys insectifera
It is one of the most enchanting and bewitching orchid species, known as the fly orchid. These flowers perfectly imitate the female counterparts of the insects and also secrete sex pheromones. As a consequence, attract the male insects who attempt for copulation but end in pollen dissemination.

Although plants do not have a brain but they are smart none the less and Caladium steudneriifolium is a perfect example of this. In order to protect itself from herbivory and avoid ovi posting moths they have their leaves appear as variegated and diseased. As a result, moths and caterpillars donot turn to these unhealthy plants for any of their purpose. 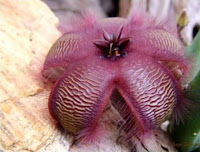 On crossing the South African deserts one may come across some left-over pieces of flesh, pecularity being their star-shaped; these star-shaped chunks are ,in fact, cactus-like mat forming succulent plants. These succulents have a putrid stench similar to that of rotten meat, attracting insects and flies that aid in dispersal of their pollen grains.

Another native of South Africa, it is dwarf perennial herb. Its tiny green leaves are covered with white papery stipules. From a distance they appear as bird droppings while on the other hand their closer view gives them snake-like appearances, owing to their white scaly stipules. It is their typical yet unique appearance which protects them from herbivory.

The above description surely makes us go down with enthralling characteristics of the plant kingdom. These are some of the discovered examples. There may be many more other engaging phenomenon and still new species and plants yet to be discovered which would surely take our breaths away.

I would like to sum up my article with a beautiful quote by George Washington Carver:

"I love to think Nature as an unlimiting broadcasting station, through which God speaks to us every hour, if we will only tune in".

5. The Encyclopedia of Succulents. http://www.llifle.com