The Department of Agriculture, Cooperation & Farmers Welfare (DAC&FW) of the Ministry of Agriculture & Farmers Welfare organizes Rabi and Kharif Conferences every year with a view to review performance of the preceding season and to prepare strategies for the coming season. In order to review the production performance of Kharif-2015 season, formulate strategies for crop production for ensuing Rabi 2015-16 season, take stock of inputs to ensure timely supply and to create awareness of new technologies & innovations in crop production and allied sectors, a National Conference on Agriculture for Rabi Campaign 2015-16 is being organized on 22nd and 23rd September, 2015 at the National Agriculture Science Center, ICAR Pusa Complex, New Delhi.

The Agriculture Production Commissioner / Principal Secretary / Secretary of Agriculture & Horticulture / Commissioner / Director of Agriculture / Horticulture from all the States / Union Territories; Scientists from Indian Council of Agricultural Research (ICAR); officers from the Department of Fertilizer (Government of India); Refinance institutions like National Bank for Agriculture and Rural Development (NABARD); officers of the Ministry of Agriculture & Farmers Welfare will participate in the conference. During the conference key presentations on performance of crop production during Kharif 2015 and strategies / prospects for Rabi 2015-16; and on focused topics highlighting innovative schemes related to agriculture & horticulture as also new research technologies would be made for providing exposure to the States.

The Conference would be inaugurated by the Hon’ble Minister for Agriculture & Farmers Welfare, Shri Radha Mohan Singh; Hon’ble Ministers of State, Dr. Sanjeev Kumar Balyan and Shri M.K. Kundariya will grace the occasion. They will all be addressing the administrators, technocrats, agricultural scientists, representatives of various central departments / autonomous bodies and media persons invited to this important event. Shri Siraj Hussain, Secretary, Department of Agriculture, Cooperation & Farmers Welfare under whose leadership and guidance the Rabi Conference is being organized will be present through the two day sessions and will address at the inauguration. 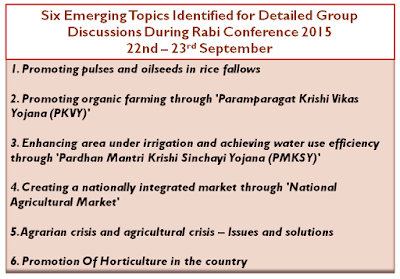 Six emerging topics identified for detailed group discussions amongst participating states under the guidance of DAC & FW on the first day of the conference are as under:

6. Promotion Of Horticulture in the country

Recommendations of the groups following the discussions will be further fine tuned in consultation with the States on the second day of the conference & final outputs, shared by the department with all the concerned.

The Rabi season is an important as Kharif in ensuring the nation’s food security. The normal area that is cultivated in Rabi is 61.43 million ha. The principle crops are wheat, other cereals like barley, rabi jowar, rabi maize, pulses like bengal gram, oilseeds like linseed, rape seed & mustard, safflower and commercial crops like tobbaco. Rabi cropping system contributes to the country’s food grains output to an extent of about 51% on an average. The department’s strategy is to maximize the rabi output against the backdrop of rainfall deficit in some parts of the country.
Click here for Programme Details
Group Wise Background Notes cum Agenda