Traditional Knowledge Digital Library (TKDL), a Unit of Council of Scientific and Industrial Research, located the patent application filed at European Patent office by M/S Pangaea Laboratories Limited and filed pre-grant opposition along with prior-art evidences from TKDL, proving that turmeric, pine bark and green tea, are being used as a treatment for hair loss, since long in Indian systems of medicine like Ayurveda and Unani. The above UK based company had filed the patent application at European Patent office in February, 2011. CSIR-TKDL Unit had filed evidences from TKDL on January 13, 2014 after the patent application got published on website, pursuant to which the patent application is finally deemed to be withdrawn by the applicant on June 29, 2015. Till date CSIR-TKDL Unit has achieved success in about 200 such cases without any cost. 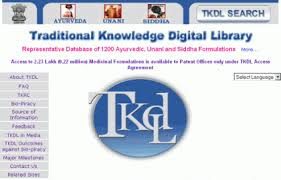 Traditional Knowledge Digital Library of Council of Scientific and Industrial Research (CSIR-TKDL), headed by Dr. Archana Sharma, submitted proof in the form of references from ancient books in this case, which said the herb and its extracts of Myristica Fragrans were historically used for oral diseases in Indian systems of medicine.
TKDL is a collaborative project between Council of Scientific and Industrial Research (CSIR), Ministry of Science and Technology and Department of AYUSH, Ministry of Health and Family Welfare, and is being implemented at CSIR. It provides information on traditional knowledge existing in the country, in languages and format understandable by patent examiners at International Patent Offices (IPOs), so as to prevent the grant of wrong patents. TKDL thus, acts as a bridge between the traditional knowledge information existing in local languages and the patent examiners at IPOs.
[Source: Press Release, Press Information Bureau, India]