Nature provided man with all the basic requirements for his existence, which is one of the reasons why nature was respected in the olden times. After coming in contact with plants people began to realize their significance, importance and how they could be of great use to them. Since ancient times, man has been using different parts of various plants as drugs. This dependency on plants for medicine not only prompted good health but also helped in maintaining a balanced environment. The variety of plants used differed from place to place depending on the confined ecosystem and requirements although the human problems they dealt with remained the same. For thousands of years plants have demonstrated their effectiveness not only as healing agents but also as care-takers of the surrounding environment.

Fresh water environment has been part of human evolution and revolution since time immemorial which is evident from the historical fact that all ancient civilization were on the banks of perennial rivers or at least in places where fresh water was easily available. Freshwater wetland is one such lentic water body on which men depended as a source of water (Kamat S.V., 2004). Wetlands in addition to providing mankind with its basic requirements of water for direct consumption and irrigation also provide food, fodder, fibre and fuel on account of their rich plant resources (Gopal,1992; Kamat S.V., 2004).

With ever increasing population and its ever increasing demand exerting strain on earths limited resources it became necessary to study one of the earths richest and renewable resources. Hence ethno-botanical studies of aquatic weeds was carried out (Kamat S.V., 2004). It was observed that many of the aquatic weeds had medicinal values and were used in Ayurveda and folk medicine. All these aquatic weeds are reported to contain some percentage of crude proteins and minerals (Desai ,1924). So it is time to protect these aquatic weeds with multiple uses for our future generation. 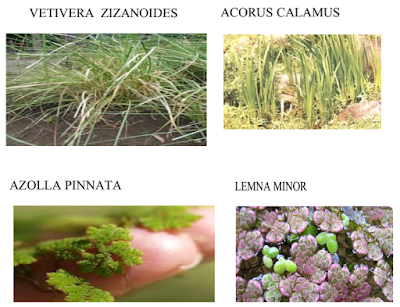 While compiling the aquatic weeds of the wetlands, special attention was paid to the ethnobotanical uses of the aquatic weeds. As far as possible most of the aquatic weeds were identified in the field. Confirmation was done with the help of standard reference books. The information is is primarily collected from the authors personal observations and is supplemented by the records on the Indian medicinal plants by Cooks 1901-1908; Desai , 1924; Vartak 1966 and Majid 2000.
Species are described below mentioning botanical name, local name, ethnobotanical information and their location.

Acorus is an important aquatic weed and has medicinal value as an expectorant. It is a stimulant and traditional household remedy for common cold, throat infection, sprains and external injuries. Tolerable hot paste of the root stock is applied to the affected areas in cases of sprain, arthritis, injury and inlfuenza. Restricted to the wetlands of Ponda.

Yet another beautiful aquatic fern, is used as a good source of bio-fertilizer. Its value lies in its nitrogen fixing capacity whereby the plant is capable of reducing nitrogen demand in the soil. It is age old practice of the paddy cultivators of Goa to use this fern as a bio-fertilizer since it provides nutrition to the crop and it also improves soil texture and increases water holding capacity of the soil. Found growing in Salcete, Tiswadi, Mormugoa and Sattari.

It is a good tonic and used in preparation of hair oil. It is also a good nerve tonic found in the wetlands of Pernem Taluka .

It is used as fish food and biofertizer. This plant is dominating in the surviving wetlands of Ponda, Pernem, Salcettei and Sattari talukas.

It is an aquatic fern ,the young fronds just uncoiling, are cooked and widely eaten as vegetable. Found in the wetlands of Ponda, Sanguem, Canacona Talukas.

It is aquatic weed commercially exploited by few tribes in Sattari, Canacona and Sanguem talukas since it is available in the wetlands of these Talukas. Tuberous roots produced by it have a nutty flavor.The starchy edible tubers of the plants are consumed as a rice or potato substitute. Found in the wetlands of Sattari, Canacona and Sanguem taluka.

It is a good hair tonic and hair dye. Traditionally Goan women make a preparation by mixing its leaf juice with coconut oil and use it for various hair problems. It also serves as a medicine for cats. It is surviving in the wetlands of Ponda, Pernem, Salcettei and Sattari talukas.

It is considered to be one of the worlds worst weeds due to its vigorous growth rate. This fast growing troublesome plant is a good source of animal feed, organic fertilizer, biogas and fibre. It is also a source of paper and pulp. Plant acts as scavenger when it grows on polluted waste waters . When grown on sewage effluents, 800 kg dry matter per hectare per day has been reported to be yielded by water hyacinth .It is also used as livestock feed including fish.It is the most abundantly growing weed in wetlands of Marmagoa and Salcette Talukas.

Astingent, antiflatulent. Juice of the plant is given in acute amoebic dysetry and Tuberculosis. It is also given in cases of fevers. It is used by the farmers in the Salcete taluka as fodder and vegetable. Found in the surviving wetlands of Salcete, Ponda, Pernem and Sattari talukas.

Plant consists of flattened minute leaf like fronds and posses minute roots. Lemna is a good source of feed for fish and Ducks, also used as bio-fertilizers by the farmers of Goa. Its rapid growth rate and capability of purifying wastewaters makes Lemna an efficient agent for water purification treatment.Found in the wetlands of Tiswadi and Bardez Talukas.

It is a good source of organic fertilizer and liquid extracts from the plant improves the seed viability rate and seedling vigour of some crops.It is also a source of cattle feed. Found in the wetlands of Ponda and Bicholim Talukas.

It is a dominating wetland plant found in Goa. Petals of the flowers are cooling and act as sedative. Seeds are a good tonic. They also function as an astringent, that is, mouth freshening and are useful in curing bleeding due to internal injury. Seeds of Lotus are also a remedy on high pulse rates. The powdered rhizomes are used in dysentery, dyspepsia and piles. Rhizomes, Spongy petioles and peduncles are cooked and eaten by poor people. Tradionaly it is offered to goddess Saraswati. This plant is dominating in the surviving wetlands of Ponda, Pernem, Salcette,Bardez, Tiswadi , Bicholim and Sattari talukas.

This is a fast growing aquatic weed has occupied nearly half the wetlands of Goa. Though causes nuisance in the field by its luxuriant growth in Goa the farmers before making the field ready for cultivation remove this weed dry it and then bury it in circular trenches around the coconut palms specially on the bunds of the fields used as a good source of bio-fertilizer .

It is a grass supposed to be anti-inflammatory and an appetizer. It is also used to cure vomiting caused during Cholera. Local people use it as insecticide.It is age old practice by the locals to use it as cooling agent. This plant is dominating in the surviving wetlands of Ponda, Pernem and Sattari talukas.