BUDGET 2015 WITH REFERENCE TO RESEARCH IN SCIENCE, AGRICULTURE, ECOLOGY AND ENVIRONMENT

Today on the ‘National Science Day’ it also happened to be the budget announcement day for India.

National Science Day is an occasion to remember the dedication, determination & untiring efforts of our scientists. They are India's pride. — Narendra Modi (@narendramodi) February 28, 2015


Science & technology will determine India's future, just as it has played a crucial role in bringing our Nation to where we are today.
— Narendra Modi (@narendramodi) February 28, 2015


As citizens, we are concerned about the socio-economic impact of budget viz., the tax rate, price rise and fall of commodities, infrastructure and other development. However, scientists and researchers are more concerned about the budget plan for the research activities. Here, we have analyzed the budget 2015-16 with reference to the allocation and announcement made for research in science, agriculture, ecology and environment.

Department of Science and Technology

For the 23 independent autonomous institutions and professional bodies under department of science and technology, put together the plan and non-plan amount Rs. 872.50 crores have been allotted.

For technology development programme and S & T Programmes for Socio Economic Development an amount of rs.154 crores have been allocated for each. Technology development programme aims to develop indigenous technology through joint projects with industry and socio-economic Ministries. S&T Entrepreneurship Development, Science & Society Programme, S&T Communication & Popularization, which were hitherto separate Plan schemes have now been merged and renamed as - S&T Programme for Socio Economic Development - insofar as budget outlays are concerned. 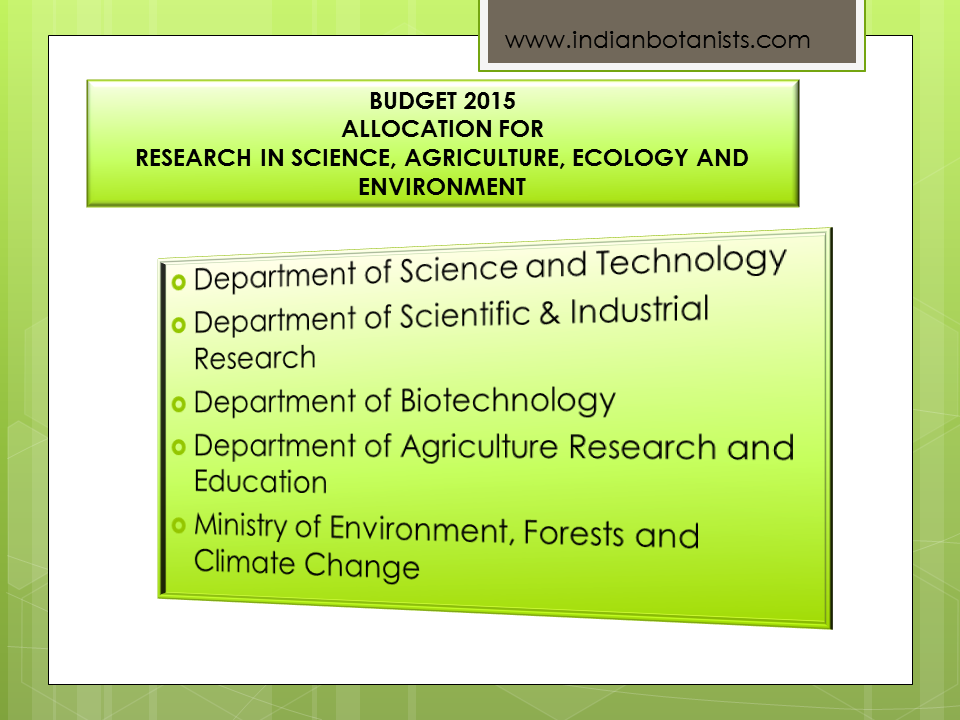 For DISHA programme for women in science (Women Scientist Award) there is a meager increase, from Rs.44 crores in the year 2014-15 to Rs.53 crores for the year 2015-16. It is important to note the recently a hike of nearly 30-50% in amount of award for women scientists was announced by government. It indicates, probably the number of awardee will be reduced this year.

Department of Scientific and Industrial Research


Department of biotechnology (DBT) has an outlay of rs 1625.14 crores in the current budget. Out of which about Rs.500 crores are allocated for sixteen autonomous institutuin and profession body working under the administrative control of the department.

Assistance of Rs.775.50 crores will be disbursed to different scientific bodies under the head Human Resource Development (HRD), Bioinformatics, Research & Development - R&D projects, including international collaboration programmes, Grand Challenge Programme, Programme for Promotion of Excellence, Biotech Facilities, etc. Major (Rs.470 crores) will be spent for R&D projects, where as for bioinformatics amount of Rs.43 crores will be provided which is almost twice the amount of last year.

For public private partnership under the schemes - Small Business Innovation Research Initiative (SBIRI), Biotechnology Industry Partnership Programme (BIPP), Support to Biotech Industrial Parks and Expanding the Industry Innovation Funding Schemes beyond SBIRI and BIPP schemes, etc. there is a provision of an amount of Rs.69 crores.

Interestingly, no fund has been allocated for international co-operation under DBT.

Department of Agricultural Research and Education


Total out lay for this budget 2015-16 for Department of Agricultural research and education is Rs.6320 crores. This includes mainly payment of grant-in-aid of Rs.5912.21 crores to enable to meet the various expenditure on various research institutes under the administrative control of ‘Indian Council of Agriculture and Research (ICAR)’. Provisions are for its several research projects, schemes and activities including National Innovation Agricultural Project. 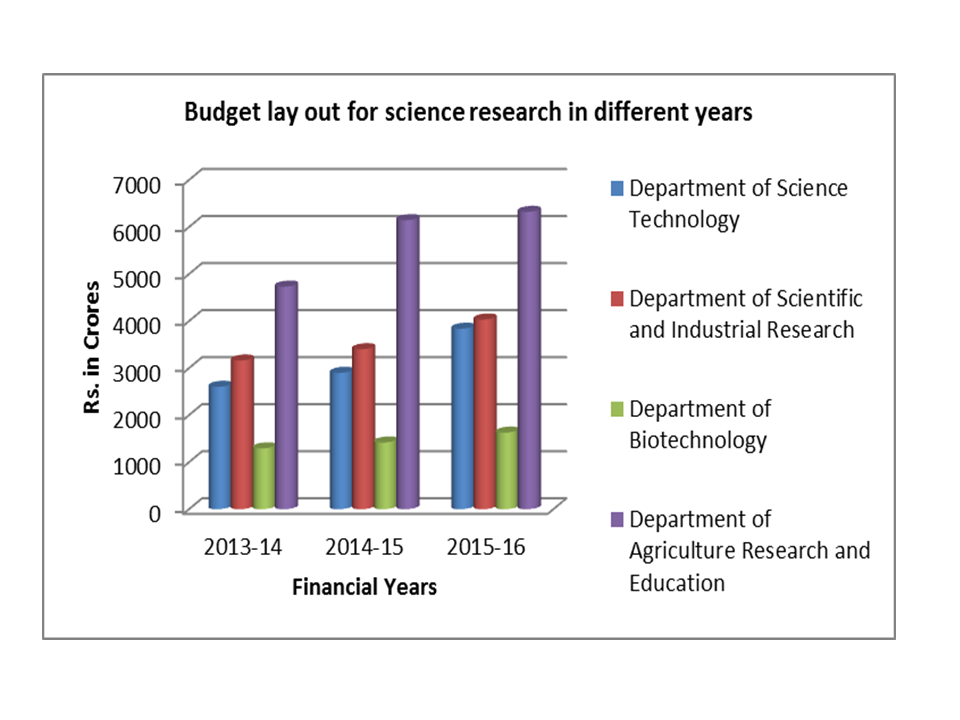 Rs.706.83 crores have been allocated for soil and water conservation which mainly incudes of about Rs.600 crores for Natural resources management institutes including agroforestry research.


A sum total of around Rs.131 crores have been allocated for research activities of which Indian Council for Forestry Research and Education (ICFRE) will be provided Rs.125.60 crores. ICFRE has eight Regional Research institutes and four advanced research centre in different Eco-Geographic Regions of the country to take care of the research needs for the regions.

With objectives to survey of the plant resources of the country, complete taxonomic studies of all the flora of the country, listing endangered species and undertaking measures for their effective conservation, to identify, collect and preserve specimens of plant useful to human being economically and otherwise, Botanical Survey of India (BSI) has been allocated a total sum of Rs.64.29 crores.

Ministry of Environment, Forests and Climate Change have been allocated Rs.160crores for ‘mission on climate change and adaptation’


The National Medicinal Plants Board (NMPB), under the Ministry of Ayurveda, Yoga and Naturopathy, Unani, Siddha and Homoeopathy (AYUSH) as part of its mandate, has been taking steps for conservation and cultivation of medicinal plants, focus on R&D, setting up quality standards, awareness raising, institutional strengthening and increased outreach through various State agencies like State Forest Departments, R&D organizations, facilitation centres, agriculture universities etc. During this budget NMPB has been allocated an amount of Rs.61 crores.

Rs.50 lacs have been allocated to National Institute of Medicinal Plants.

National Mission on Medicinal Plants was integrated with National AYUSH Mission in September 2014 comprising of other components of AYUSH services. Put together an amount of Rs.318 crores have been allocated during this budget of which provision of Rs.8crore is for North East region under National Mission on Medicinal Plants. Rs.20.40 crores have been allocated for North Eastern Institute of Folk Medicine.
*****
Note- Inputs for the above information was taken from India Budget Bulletin available Indian Budget Portal.