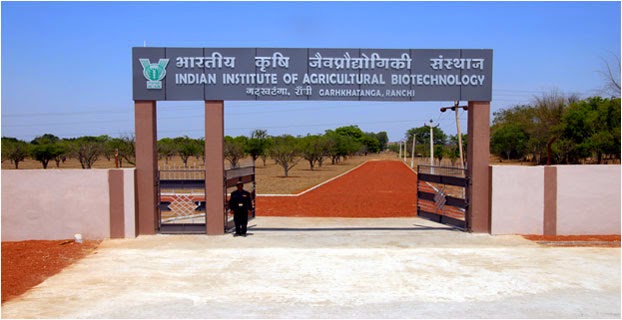 Agriculture minister Radha Mohan Singh laid the foundation stone of Indian Institute of Agricultural Bio-Technology at Garh Khatanga near Ranchi (Jharkhand). Shri Radha Mohan Singh said that with the opening of this institute the provisions made for biotechnological education will pave a way for preparing trained human resource who will create awareness among farmers about the advanced agriculture by use of bio-technology technique along with traditional methods of farming.


The Minister said that there was an urgent need for setting up such type of institute in this region. The Central Government has taken a decision to open this Indian institute of Agricultural Biotechnology (IIAB) in Jharkhand state keeping in view the importance of agricultural biotechnology. The mission of this institute will be to strengthen ongoing research work, fundamental research in the field of biotechnology, as also building capacity for human resource. This institute will generate technology to enhance agricultural production, give postgraduate and Ph.D degrees to students, he said. This will be helpful in development of quality human resource and employment generation. This institute will be helpful in strengthening employment security and food security for tribal population and farmers of this state and the entire country. The Government proposes to confer the deemed university status to this institute, he added.

There is a need of bringing second green revolution, particularly, in eastern states of the country which were not covered earlier during first green revolution. He mentioned that development can be accelerated in these states because of adequate and human resource and suitability of the States for organic farming as use of pesticides and chemicals and fertilizers here is almost nil. As such agricultural biotechnology will play a significant role in increasing quality production in these states.

'The Indian Institute of Agricultural Bio-technology' at Ranchi, Jharkhand was proposed by the then finance minister P Chidambram of UPA Government during the 2013-14 budget.
The estimated cost of this project is Rs 165 crore. The campus of the IIAB will be located in Garh Khatanga, spread out in three locations over an area of about 122 acres. It is situated on the ring road close to Ranchi - Jamshedpur highway, about 15 km from Ranchi town. The construction's specification is aimed to achieve at least 80% green building rating.