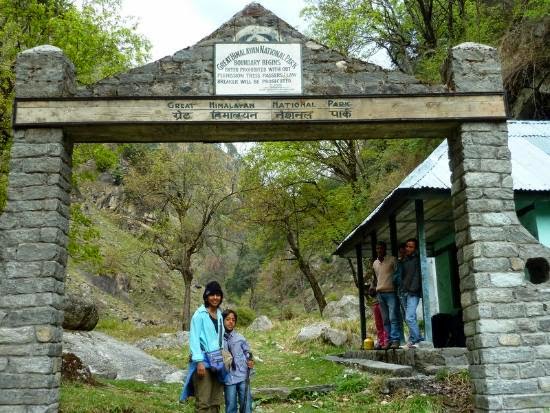 The Great Himalayan National Park (GHNP) is located in the Kullu District of Himachal Pradesh, India. Initially constituted in 1984, GHNP was formally declared a National Park in 1999, covering an area of 754.4 sq kms. In 1994, two major changes were made in land use around the Park. A buffer zone of 5 km from the Park’s western boundary, covering 265.6 sq km. and including 2,300 households in 160 villages, was delineated as an Ecozone. Most of the population (about 15,000 to 16,000 people) in the Ecozone are poor and dependent on natural resources for their livelihoods.

Bounded to the East by the Himalayan Mountains, the Great Himalayan National Park (GHNP) forms part of the boundary between four ecological zones: (1) the dry deserts of interior Asia and the well-watered lowlands of the Indian plains, (2) the Oriental and Palearctic faunal realms, (3) the high plateau of Tibet and the jumbled Himalayan peaks, and (4) the catchments of the Beas and Sutlej Rivers, both mighty tributaries of the Indus.

More than 425 genera and 125 families of higher plants have been recorded within the Park area occur. GHNP provides a home to 34 of the 47 medicinal plants as threatened for the State (Critically endangered/CR =5; Endangered/EN = 17; VU = 12). In addition, two other species of medicinal plants, (Meconopsis aculeata and Saussurea gossipiphora) assessed as CR are also found in the Park.

The flora of GHNP shows affinities with Mediterranean, Tibetan, and the Peninsular Indian region. For example, species of Valerians, Dactylorhiza, Yew, and Leycesteria are typical taxa which extend to Afghanistan and west China. Other affinities that are met with here are in form of buckthorn (Hippophae) of palaearctic region; Cedar trees, herbaceous Violets, and grasses such as Poa of Mediterranean region; and spurge (Euphorbia) shrubs of Peninsular India. In addition, GHNP has a number of endemic species of Himalayas, for example several species of balsams (Impatiens), species of Androsace, Hedysarum, Draba (Whitlow grass),etc.

“Once again we have some exceptional places waiting to be inscribed on the most prestigious list that celebrates our common natural heritage,” says Julia Marton-Lefèvre, IUCN Director General. “However, declaring a site World Heritage is not an end in itself. World Heritage status should guarantee excellence in protection and the highest level of commitment to conservation – collectively at the international, national and community levels.”

All information about Great Himalayan National Park has been compiled from http://www.greathimalayannationalpark.com