Tweet
The concept of Glowing Plants is gaining more popularity on internet and among scientific communities in the last couple of months. In this regard Indian Botanists Blog-o-Journal also published an article, Will 'Glowing Plants' Replace Street Lights? recently. A group of biologists under the project ‘Glowing Plants’, aims to create a glow-in-the-dark plant using synthetic biology techniques. Will this replace the traditional street lights with glowing plants and trees in dark in near future? Rabish Chandra member of Indian Botanists Blog-o-Journal spoke to Antony Evans, Project Manager, Glowing Plant Project to understand about their ambitious project.


Antony Evans: Thanks a lot. It's a kickstarter crowdfunding campaign to raise funds to create a glowing plant using synthetic biology


Indian Botanists: What is the goal and objective of this project?

Antony Evans: There are two goals of the project:

Indian Botanists: What inspired you to initiate this project?

Antony Evans: The 2010 Cambridge iGem team was working on bacteria which glowed and had the idea to create glowing trees as lighting. Omri talked about this idea at Googles Solve for X conference, and everyone encouraged him to make it happen. It's such a simple idea, and yet one which is really revolutionary and I think that helped our success.

Indian Botanists: Please tell us in brief about the core team member of this project.

Antony Evans: Omri Amirav-Drory, PhD, is the founder and CEO of Genome Compiler, a synthetic biology venture. Prior to starting his company, Omri was a Fulbright postdoctoral research fellow at Stanford University School of Medicine and HHMI, performing neuroscience research using structural and synthetic biology methods. Omri received his PhD in biochemistry from Tel-Aviv University for biochemical and structural studies of membrane protein complexes involved in bio-energetics.

Antony Evans (myself)  has an MBA with Distinction from INSEAD, an MA in Maths from the University of Cambridge and is a graduate of Singularity University’s GSP program. He is both a Louis Frank and Oppidan scholar and worked for six years as a management consultant and project manager at Oliver Wyman and Bain & Company. Prior to this project he co-founded the world’s first pure mobile microfinance bank in the Philippines and launched a mobile app in partnership with Harvard Medical School.

Kyle Taylor was born and raised in the great state of Kansas, where his love of plants evolved out of an interest in the agriculture all around him. This lead him to major in Agriculture Biochemistry and minor in Agronomy at Iowa State University and then pursue a PhD in Cell and Molecular Biology at Stanford University. Not too bad for a rural country boy! Since a lot of people helped him get to this point, he’s driven to share his passion and excitement by making what he does more accessible. Kyle teaches Introduction to Molecular Cell Biology at Biocurious and is our resident plant expert.

Indian Botanists: It has been learnt that people can donate directly for this project through ‘KickStarter’. What is the concept behind ‘KickStarter’ and how it happened?

Antony Evans: Kickstarter is a funding platform for creative projects. Everything from films, games, and music to art, design, and technology. Kickstarter is full of ambitious, innovative, and imaginative projects that are brought to life through the direct support of others.
Since our launch on April 28, 2009, over $500 million has been pledged by more than 3 million people, funding more than 35,000 creative projects.
Thousands of creative projects are funding on Kickstarter at any given moment. Each project is independently created and crafted by the person behind it. The filmmakers, musicians, artists, and designers you see on Kickstarter have complete control and responsibility over their projects. They spend weeks building their project pages, shooting their videos, and brainstorming what rewards to offer backers. When they're ready, creators launch their project and share it with their community.
Every project creator sets their project's funding goal and deadline. If people like the project, they can pledge money to make it happen. If the project succeeds in reaching its funding goal, all backers' credit cards are charged when time expires. If the project falls short, no one is charged. Funding on Kickstarter is all-or-nothing. 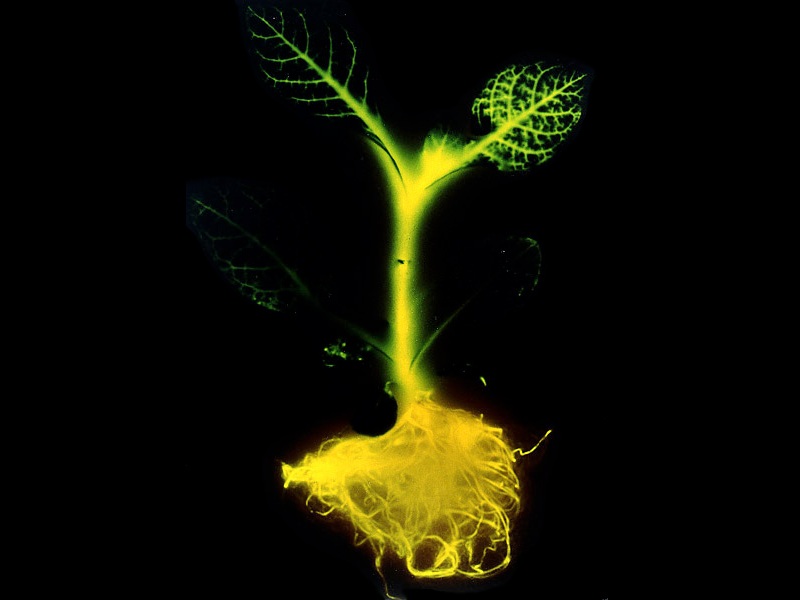 Indian Botanists: Environmentalists fear that this will result in uncontrolled release of bioengineered seeds and plants produced through the controversial and risky techniques of synthetic biology. How do you react?

Antony Evans: Lets start with the basics, we are introducing well categorized, non toxic genes into a non-invasive plant which is already widely grown across the country with no ill effects. The plant propagates neither through insects or wind, will survive poorly in the wild (as it prefers colder climates) and has few relatives to cross-pollinate. Instead of providing a selective advantage the genes we are introducing impose a metabolic cost to the plant which should further reduce the risk of it growing uncontrollably (as it will be even weaker than the untransformed varieties). The plant is not food for humans or animals, nor will there be risk of it entering the food chain.
We've got advice from several experts in the field:
George Church, a professor at Harvard and an expert on biological safety, who described on record our project as 'as safe as it gets'. He said: "Safe, well I think our group works on engineered biological safety so we are a little fanatic but this falls into the category of things which are in many countries accepted practice a huge fraction of the worlds economy are based on genetically engineered plants. And this is something which stays in place and if it spread wouldn't be so bad, it wouldn't have any selective advantage to anything. So about as safe as you can get."
John Ward, Professor of Synthetic Biology at University College London, who said that the actual effect a glow-in-the-dark gene would have on local environments would be negligible. I quote: “The actual genetic mutation in the plant, which would be luciferase genes, are not any kind of threat. It just makes it glow slightly. That’s not going to give it any kind of competitive advantage in nature, which is the only way that the gene could thrive.”

Indian Botanists: Many aspiring researchers on genetic transformations admire your team member. What message you would like to convey them?

Antony Evans: Try to do your own kickstarter campaign!

Antony Evans: Yes, link of the video is http://www.kickstarter.com/projects/antonyevans/glowing-plants-natural-lighting-with-no-electricit (Watch the video below)

Indian Botanists: Thanks for sharing the information about ‘Glowing Plants’. Indian Botanists Blog-o-Journal wishes all the best for this scientific endeavours.

Antony Evans: Happy to do an interview with Indian Botanists Blog-o-Journal.